The New Swear Jar: Why Seemingly Good Buzzwords Could Be Harming Your Higher-Ed Brand

Why seemingly good buzzwords could be harming your higher-ed brand

Shall We Play A Game?

Ever hear of buzzword bingo? It’s a fun and sneaky variation of the timeless game. Check off words and phrases you hear uttered during a speech, meeting or conference and see who wins. But the next time your higher-ed brand is talking about how they define themselves, whip out this bad boy we created and win that office pool with flying colors. 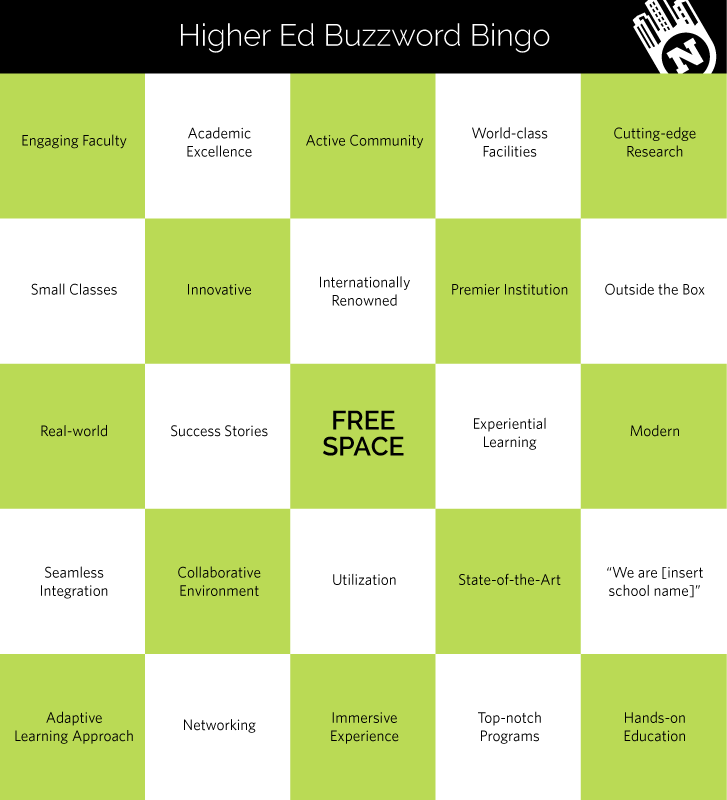 As content folks, we see a lot of words and phrases that organizations throw around to describe themselves. But sometimes, those words can get a little … repetitive, if you know what I mean. Really, though; you know exactly what I mean.

Higher ed “buzzwords” can be really easy ways to convey more complex ideas in a short amount of time. And maybe at one point, they were really nifty-sounding and sort of catchy, like a hit song on the radio that you tolerated and eventually liked. But then you keep hearing it over and over again, and you just get sick of it sooner or later.

Heard It All Before

This isn’t inherently anyone’s fault, really. After all, buzzwords were meant to streamline a process of communication, to simplify things — and admittedly, there’s a place for inside lingo in most professions.

But when you’re displaying yourself to a public audience — people that read hundreds of pages of text per day, sifting through the filler to get to the real meat of their search — buzzwords don’t make anything stand out. In fact, they make you look just like everyone else.

Don’t get me wrong, the thoughts and ideas behind most buzzwords are great aspirations for any organization, let alone the higher-ed model. But when’s the last time you heard of a university that wasn’t talking about their “hands-on experience”, or worse yet, their “all-around academic excellence”?

My most (or least) personal favorite? The seemingly superhuman ability to “think outside the box”, the predominant cliché in expressing creativity, which is pretty darn ironic.

Sure, a fancy new site design will help your image, but as we’ve discussed earlier, a redesign only solves part of the problem. So how can your organization communicate that message without sounding too cookie-cutter, or — on the other end of the spectrum — flying over everyone’s heads with dreaded ambiguity?

Content writers use buzzwords because they’re easy for an internal audience to understand, but there’s an underlying sense of obligation in their use. Too often, we’re worried that innovation ends in failure; to say something that hasn’t been said before means risking the possibility of a misstep.

But look at this way: The Internet is one big cocktail party. Everyone’s talking to each other — exchanging ideas and information, describing themselves in great detail — but if everyone’s saying the same thing, then it’s a pretty boring party. All that talk just adds up to unwanted noise.

Very few organizations actually play to their strengths and design messaging that fits their personality. But fear not, there’s a way to step around the buzzword beehive that not only voices your organization clearly, but also in a way that’s uniquely you.

Be yourself, not everyone else

Mom and Dad were right during that awkward phase in high school (curse you, junior prom!) Don’t try to be something that you’re not; people can see through that pretty easily on the Web.

Use phrases that actually speak to you and your audience. Instead of saying you have an “engaging faculty,” some institutions might benefit with something closer to, “Our professors aren’t just checking into a lecture and checking out for the day. They’re known around here for their handy personal tidbits and life-saving advice alike. Trust us, you’ll thank them later.”

A content “card sorting” exercise can identify the words you really use to describe your organization, one of the first steps in identifying your brand and how you think about yourself. But that also means you should still …

Listen to your audience

Although websites are a one-way form of communication, designing an effective messaging structure is a two-way street.

Buzzwords are often seen by users as a way to hide behind words, to not fully divulge what your organization is actually doing. When users read about “top-notch academics,” their B.S. meters go through the roof.

User-testing your content’s effectiveness can play a key role in molding your messaging architecture. Understand the positives and negatives of that public perception, and don’t be afraid to address it with confidence and understanding. Silence is never a good response on the Internet.

Remember the cocktail party example. Talk less like a big company and more like a person. People glaze over big words like “utilize” when “use” would’ve done the trick nicely. Another good starting point is to use more contractions (aren’t, won’t, you’ll, etc.) so you’ll sound more personable. The more your audience knows what you’re talking about, the less likely they are to tune you out.

So the next time you need to convey yourself as a premier, internationally renowned institution, circle-back and synergize with your colleagues to think outside the box with your innovative branding. Trust us, your messaging will look a whole lot better than that last sentence.