NewCity’s marketing manager and pro stand-up comedian (he actually does get paid to tell jokes, just not by us) shares some insights that work both under the spotlights and in your university marketing pieces.

Have you ever attended a live comedy show? It comes to the end of a big joke, and the comedian looks around with enthusiasm. But instead of laughing, everyone stares back at them, confused and wondering if the story was supposed to be funny or not.

This is the situation comedians fear most. Waiting for the reaction you want and getting nothing in return is gut-wrenching. But who’s at fault: the storyteller or the audience?

I’ve been teaching a comedy class for over 3 years now, and the rule I repeat more than any other (besides “keep the microphone up”) is “never blame the crowd.” Storytelling is an art, and if you don’t consider your audience, say something original, or write a good punchline, there’s a good chance your joke is going to fail.

Brand messaging and jokes are similar. A message that considers your audience, exhibits originality, and has a good punchline can often convince your target audience to give you a shot.

In How To Be A Comedy Writer, Marc Blake writes, “You should never blame the audience for a poor reaction, unless they are not specifically there to be entertained.” In messaging, whether you’re promoting the launch of a new service or convincing students to apply for your degree program, once they come to your site ready to be “entertained,” you can’t blame them for your failed delivery.

You might expect me to reference a Coca-Cola slogan or a Geico ad here, but I refuse. You do not have a million dollars to build a crack team of writers. Instead, let’s take a look at the University of Florida Career Resource Center. When I stumbled upon their site, something really stuck with me. The UF Career Center understands that some students may need a little push before they’ll take the steps to set up an appointment.

Several key messages on their homepage give these little nudges. “In 20 minutes your life can change forever,” “61% of students change their major,” and “80% of jobs are never advertised and are found through networking.”  These messages make students want to take action, not feel bad about wanting to change their major, and they entice them with the promise of a mysterious hidden job network.

Just like with any comedy show, your audience will always change. It’s important to re-evaluate your audience and adjust. The last time I bombed on stage, I didn’t adjust my tone to reach the crowd. You may not receive an immediate, painful reaction like I did, but you can still measure your message’s effectiveness. Don’t worry—people can’t throw tomatoes on the Internet. 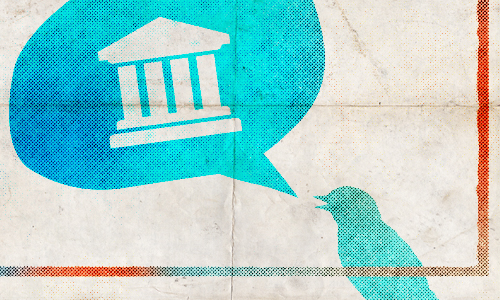 Originality leads to memorable work. Original jokes are the famous pieces that we quote over and over again at work and dinner parties. Dave Chappelle, Louis C.K., George Carlin, Maria Bamford, Eddie Murphy and Amy Schumer tell jokes that stay in your memory. They leave such an impression on their audience that the joke never leaves their minds. Excellent brand messaging has the same effect.

In my comedy class, the beginner students are tasked with writing the equivalent of a 3-minute set. The only rule is that the piece must be about themselves. The goal for this assignment is to introduce them to writing original comedy. I want their 3-minute set to be something that no other comedian in the group could perform.

In brand messaging, one of your main goals should be to convince the audience that you are different from everyone else and that you’re worth considering. In The New Swear Jar, my colleagues talk about the frustration of writing marketing copy in higher education. Fighting for the best students can be an extremely competitive effort, and missing key messages can mean the difference between landing a conversion or not making the short list of campuses to visit. But over-used phrases such as “engaging faculty,” “real-world experience” and “hands-on education” don’t separate anyone from the pack.

Creative exercises and some heavy self-evaluation can help get at those intangibles that make your institution or product unique. One of my favorite examples of an excellent higher-ed branding message is on the Hollins University Student Life page:

Everyday life at Hollins can be a bit zany. We like to think of it as just another expression of our unique creativity.

We don’t engineer it. It’s as spontaneous as a late-night trip to Walmart in pajamas. Or painting messages on the Rock. Or dying your hair with multicolors on a bet.

The fabric of life at Hollins has many threads, yet the pattern is harmonious. People respect and appreciate each other here — and care, too.

It comes off as authentic. As if a current student is speaking directly to the prospective student. This is a great example of taking a phrase like, “we have an active community,” and explaining what makes your experience different from the rest.

One of the toughest tasks for any comedy writer is hitting that perfect punchline. Timing is everything in this business, and a poorly timed sip of water or an awkward stumble of words can completely ruin a joke. The end of your set is where you should bring it all together.

Nothing frustrates me more when I read a great piece of marketing copy that falls flat at the end. The beginning build-up was exciting, but it never convinced me to actually DO anything. In 3 Ways To Hobble Your Higher Ed Brand, David talks about universities that “nerf” their messages and stop short of effectively selling their brands. A school playing it safe with its brand never fully realizes its potential.

Your brand punchline should be powerful, and it should be in every interaction you make with your audience. The branding at Airbnb is a great example here; (Ok, I tried but this example is just too good). Their marketing slogan “Belong Anywhere” works because they carry it through everything they produce. Their now-famous logo’s roots:

The bélo was created as a symbol of belonging. Airbnb encourages users to create their own “bélo” and share what it means to them. This powerful form of user-generated content invites customers to infinitely re-imagine their brand for them, so that it stays personally relevant.

Creating an excellent message is one thing, but how do you reproduce it? I encourage my fans to share any of my material they love in hopes that it will create new fans of my comedy. Campaigns like the airbnb example above are great ways to make sure your brand messages don’t stop short.

My joke book now has several hundred pages worth of material — some of it gold; some of it never to be heard in public. Every comedian, even the all-time greats, has bombed on stage at some point in their career (anyone who says otherwise is lying!). Not every idea is going to work. I’ll admit that I desperately wanted to call this article “Brand-Up Comedy,” but editor-in-chief Rachel DeLauder gave me a menacing look when I suggested it.

Just like good comedy, getting your brand messages to achieve their peak potential requires a ton of tweaks and updates. This is why it’s important to keep working through ideas, check your metrics, and build on your successes and failures. And even after you find success, you still have much work ahead in order to execute on those key messages and ideas you put in place.

If your brand message is getting booed off the stage, it’s a good idea to check whether it’s satisfying these key stand-up principles.